As It Was, Ages Hence 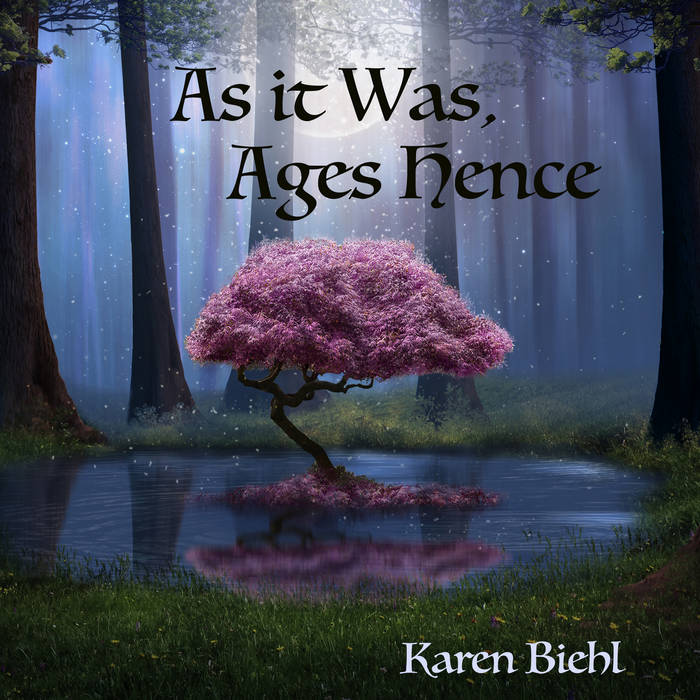 A melodic piano piece by composer Karen Biehl, “As It Was, Ages Hence” is about reminiscing and longing for beautiful idyllic times from the past. One of the first pieces ever composed by Karen, it is just now being released to the public.

Before she began composing music, Karen would hear melodies in her head that she would hum to herself. While studying opera in her early 20’s, she would often come up with her own vocal exercises based on those melodies. In time, Karen realized that these melodies were compositions and she began composing music. The melody from “As It Was, Ages Hence” was one that haunted her for many years until the day she finally composed the piece.

Karen wrote “As It Was, Ages Hence" during a time of intense yearning for her True Love, a man she felt she remembered from long ago. The inspiration behind the piece came from a vision Karen had of a magical land from long ago where she and her True Love were one. In this mystical land, the colors of nature were unusually vibrant and the trees would sway, sigh and sing with the wind.

"In a land where the trees are sighing,
To the tones of a melody
I can hear on a wing my love singing,
I can hear my True Love’s call.

In that land where the trees are enchanting
To the tones of a melody,
I can hear my True Love call me
To the land where we are one.” - Karen Biehl

"In a land where the trees are sighing,
To the tones of a melody
I can hear on a wing my love singing,
I can hear my True Love’s call.

In that land where the trees are enchanting
To the tones of a melody,
I can hear my True Love call me
To the land where we are one.” - Karen Biehl

Karen studied voice with former Metropolitan Opera tenor Thomas Hayward at Southern Methodist University, where she received a degree in Vocal Performance. While at SMU, she also studied music theory and electronic music composition with composer Jack Waldenmaier, continued her studies in piano, and played violin in the Meadows Symphony Orchestra symphony under the direction of Anshel Brusilow.

In mid-November 2018, Karen released her first solo piano album, “Starlight Dreams”, a collection of relaxing and reflective piano music to stir your soul and awaken your dreams. The album was named “Best Solo Piano Album 2018” by New Age Music Guide and ranked #4 on their top 10 albums of 2018. "Starlight Dreams" has also been nominated for the “Best Neo Classical Album 2-18” award for One World Music Radio’s awards in June 2019.

Karen is highly motivated by a desire to solve problems and transform difficult experiences into blessings for both herself and others. Inspired by high levels of stress experienced as a result of working in New York City, Karen most recently created a short guided meditation called “Portal to Peace: A Mini Meditation for Minutes which released in February 2019.