Portal to Peace: A Mini Meditation for Relaxing in Minutes 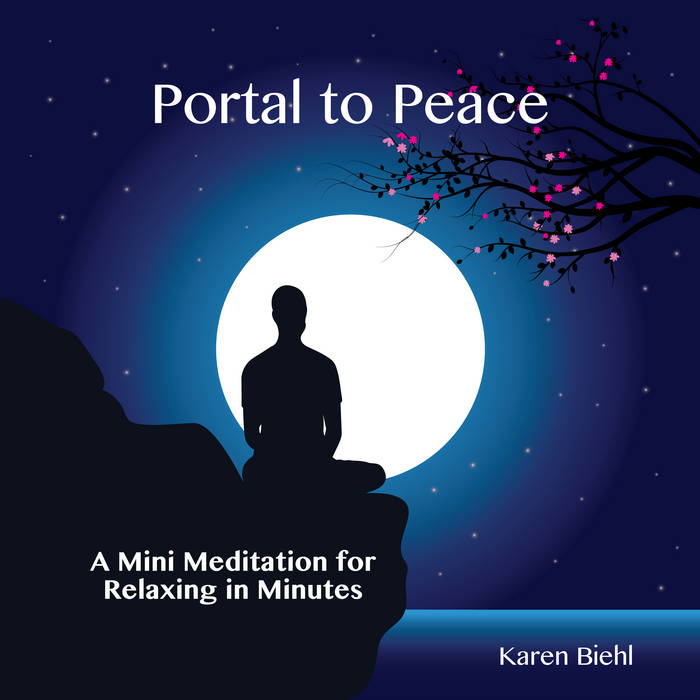 A quick relaxing meditation for finding peace and serenity. Feeling a bit stressed at work or on the go? Take a six minute break, grab your headphones and relax as you allow “Portal to Peace” to lull you into a sense of well-being and calmness.

From the creator of the “Journey to True Love”, “Journey to True Health” and “Journey to True Purpose” guided meditation series, “Portal to Peace: A Mini Meditation for Relaxing in Minutes” aims to bring peace to those with little time to meditate. Set to enchanting background music composed by Karen Biehl, “Portal to Peace” will quickly lull you into a sense of well-being and calmness. On a broader level, the meditation may even assist you in becoming a portal to peace, opening the doorway for more peace in your environment and on earth.

"Portal to Peace: A Mini Meditation for Relaxing in Minutes" was both composed and performed by Karen, who is a classically trained musician and former opera singer. The guided meditation is enhanced by synthesizer harp, choirs and sampled instruments. You’ll even hear a bit of Karen’s operatic voice as background vocals.

Within weeks of its release in November 2018, Karen Biehl’s last album, “Starlight Dreams” soared to the number two spot on New Age Music Guide’s Chart, was on Aural Awakenings’ Top 25 Chart and ranked #6 on One World Music Radio’s Chart in January 2019. The album was named Best Solo Piano Album 2018 by New Age Music Guide and was one of their top 10 albums of the year.

Whether as a standalone piece or as background in a guided meditation, Karen Biehl’s compositions combine romantic classical lyricism with meditative empowerment to assist listeners in achieving an enhanced and peaceful sense of self-awareness and purposeful focus.

"A splendid mini meditation indeed and one that if you breathe along with, should energize your day and bring a smile back to your face, oh and by the way, yes it worked for me!" - Steve Sheppard (One World Music Radio)

After graduation, Karen sang in the Dallas Opera Chorus for a season before her vocal studies took her to San Francisco Conservatory of Music, where she performed various roles with the San Francisco Conservatory of Music Opera. After studying and performing in Italy, Karen moved to Manhattan, where she performed soprano leading roles with several small local opera companies.

Over time, Karen preferred to create melodies of her own and focus on her own creative experience, rather than being restricted by rules imposed by the classical music world. In 1999, she began composing a collection of music inspired by visions of her True Love, whom she called “The Maestro”. After finally meeting him, a musician and Maestro indeed, she was inspired to create guided meditations to assist others in overcoming obstacles and fulfilling their dreams.

In 2016, also inspired by the Maestro, Karen created “The Young Artist Spotlight” scholarship program to recognize young artists. The program aims to inspire students to focus on their creative expression, and therefore on their truest self, so they put their best foot forward in all their endeavors.

In mid-November 2018, Karen released her first solo piano album, “Starlight Dreams”, a collection of relaxing and reflective piano music to stir your soul and awaken your dreams. “Starlight Dreams” was ranked #2 on New Age Music Guide’s chart for both November and December, #12 on One World Music Radio’s chart in December and was in the top 25 for Aural Awakenings Radio for December 2018. Selections from the album can be heard on New Age Radio Stars (Live365), Aural Awakenings, Northern Lights, and KMStudio Classical Radio.